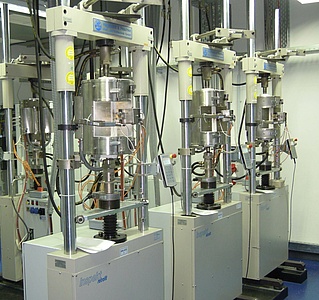 Hegewald & Peschke MPT GmbH has completed a major contract of the company Leistritz for the retrofitting of 6 creep rupture testing machines. The modernisation of the first machines has begun in 2011, and in July of this year the last machines completed. The retrofitting included control and measuring electronics, drive electronics, motors, load cells, extensometers, as well as the testing software LabMaster incl. computer system. The creep rupture testing machines are used for the permanent stress of samples. The test duration can be between a few hours and several months here. Force, path or elongation can be used as controlled variables. With this, one can perform for example creep tests (constant force), relaxation tests (constant path) and similar tests.

Furthermore, at the company Siemens AG, switching station Berlin, a modernisation of a “Roell- und Korthaus” universal testing machine RKM200 to Inspekt standard has been performed.

Besides the retrofitting of control, measuring, and drive electronics, the hydraulic clamping systems and the extensometer have been retrofitted. Also the foundry of the Daimler AG in Mannheim received a retrofit kit. A UTS 100kN including extensometer and load cell, and also new testing software LabMaster had been modernised. Both machines are used for tensile tests.

The Technical University of Munich will get a hydraulic W+B testing machine 150kN retrofitted next month. Besides the basic retrofit equipment, also the strain gauge and the software will be modernised.

And Audi Hungaria Motor Kft. in Hungary has got an old machine UTS 2507300kN, which receives a refurbishment, incl. testing software LabMaster.