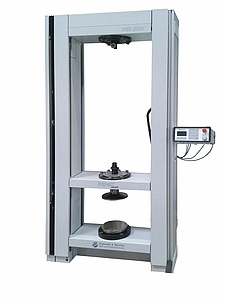 Hegewald & Peschke MPT GmbH by order of the Schweißtechnische Lehr- und Versuchsanstalt Fellbach has completely modernised a universal testing machine from Zwick 1455 20kN and delivered it to the customer at the end of last year.

The universal testing machine was equipped with a new drive and new measuring and control electronics of the type EDC2. The original load frame was preserved but was comprehensively overhauled. This included cleaning, replacement of worn or defective mechanical components as well as complete repainting. In addition, it was possible to preserve the original DMS load cell and existing testing tools.
An additional measuring channel was integrated to allow connecting an additional force and/or extension measuring device.

SLV Fellbach offers various training and continuous education programs in the area of welding and joint technology. Other emphases of their activities are quality assurance, research and development as well as material testing in welding and testing technology.