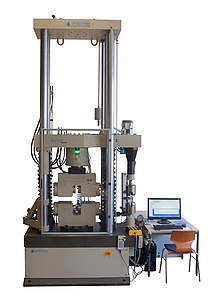 Retrofitting of a testing machine 600kN of Schenck-Trebel

After the Engineering Sciences and Mechanical Engineering faculty of the FH Koblenz had its Zwick 1474 100kN from Hegewald & Peschke retrofit in 2012, a Schenck-Trebel 600kN testing machine has now been comprehensively upgraded. This testing machine features a 600 kN main test compartment and a 60 kN side test compartment. Originally powered by two motors, it had already been retrofitted by UTS Co. Each test compartment is equipped with a hydraulic clamping fixture with separate unit, which – for reasons of noise protection – is located in an adjacent room.

The order for retrofitting was awarded after two customer visits for the purpose of taking the dimensions of the drive and measuring the electrical system. The conversion was performed on site by employees of Hegewald & Peschke MPT GmbH, including calibration of the testing machine and orientation to its operation. The testing machine shall be used by students during internships and for research projects, especially for metal tensile tests on flat material samples but also for compression and bending tests.