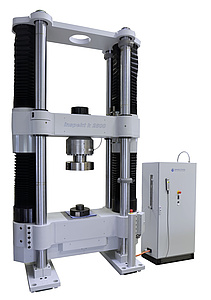 The Hegewald & Peschke MPT GmbH has extended its universal testing machine series inspekt by a model with a nominal load of 2500kN. The construction of the machine`s test frame is equivalent to that of the classical universal testing machines inspekt, nevertheless, distinguishes itself by the big dimensions due to the capacity of the machine. Thus, for example, two of the biggest ball thread spindles currently available in the market are applied. The testing machine is suited for calibrating tasks as well as classical tensile, compression and bending tests at components and norm specimens.

The first machine of this size was delivered in December 2015 to the AST Angewandte SYSTEM-Technik GmbH in Dresden. The enterprise develops and produces customised solutions for the railway technology, industrial measuring technology and power electronics. There the universal testing machine is used for the calibration of load cells for wind power plants and cranes up to 2MN. Thereby the load cell of the testing machine, which has a nominal load of 2. 5MN, has to satisfy high demands reading the precision. At the calibration by the Physikalisch-technische Bundesanstalt the load cell has received the accuracy class 00. The testing machine has a calibration incertitude of 0.05%. The control electronics of the testing machine communicate via standard interfaces smoothly with the customer-sided evaluation software, so that all necessary characteristics like load and machine way are transmitted comfortably to the calibrating programme of AST.