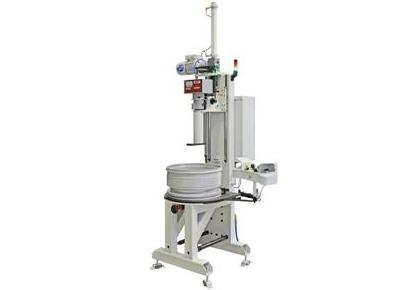 The hardness tester is equipped with various sensors that detect the position of the specimen, including its test position. The testing process is facilitated by an automated procedure. First, the probe is moved by motor to the correct starting position. The hardness test is triggered automatically. The test force is applied pneumatically. After successful testing, the measured value is displayed digitally and can be further processed digitally. The hardness tester is taught-in with hardness comparison plates. In this way, the device can output the corresponding hardness value depending on the penetration depth. In addition, the wheel hardness tester is equipped with a two-handed operation, which is mounted on the right-hand side of the machine and can also be operated manually. It is used for set-up mode including emergency stop and changeover switch between automatic and set-up mode. In addition, the wheel hardness tester also meets the requirements of the measuring equipment capability analysis, also known as measuring system analysis (MSA). This plays a major role in the automotive industry, for example, when it comes to complying with industry-specific requirements.