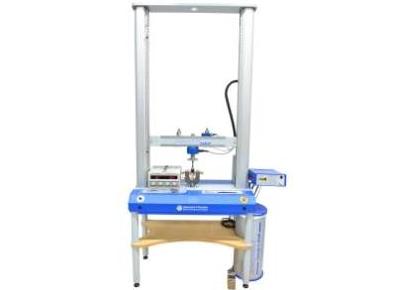 Electrical products and components in use must always comply with the latest standards and directives. This requires a series of tests. Phoenix Testlab GmbH in Blomberg is a modern testing laboratory and certification institute for technical products and innovations. It researches, tests and tests on behalf of customers in the context of product approvals and certifications. The accredited laboratories carry out comprehensive tests on products from the fields of EMC, radio, environmental simulation and electrical equipment safety. Phoenix Testlab GmbH employs 159 people at the Blomberg site.

Phoenix Testlab GmbH has recently acquired a universal testing machine from Hegewald & Peschke, type Inspekt 10 kN, for equipping its test laboratories. As its name suggests, the universal testing machine is versatile and can be used for a wide range of tests on different components. Among other things, the tests include cable strands, but mainly electric switch and push-button elements as well as components that are mainly used in the automotive sector. The object of the tests is, for example, the measurement of the forces when the start button of a car is pressed. When the button is pressed, a different voltage is applied than when the button is released, resulting in a so-called hysteresis. This describes the delayed behaviour of an output variable.