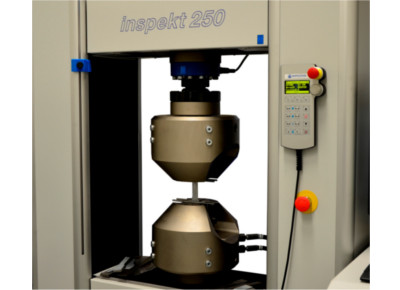 The Institute of Production Engineering has ordered a universal testing machine of the type Inspekt 250kN and comprehensive accessories for the implementation of this research work.

The special testing requirements placed high demands on the testing technology. Very short specimens with a total length of only approx. 50 mm are to be tested. The clamped area is 20x20mm, the test length is only 3mm. These tests are run cyclically to describe the Bauschinger effect. The Bausching effect is an effect found in metals and alloys that occurs in a certain direction after plastic deformation. If the material is subsequently deformed in the opposite direction after a first deformation, the elastic limit is lower during the second deformation. The reason for this are repulsive forces in the material.

Another special feature is the high speeds at which the tests are run. Tensile tests are to be carried out up to the increased quasistatic range. Maximum speeds of up to 610mm/min are achieved.

In addition to standard-compliant testing, new research topics are to be developed which will be the starting point for the extension of existing standards and the development of new standards at a later date. This is of particular interest for future research projects of the professorship. It is planned to characterize materials with increased forming speeds and materials with a pronounced Bauschinger effect.