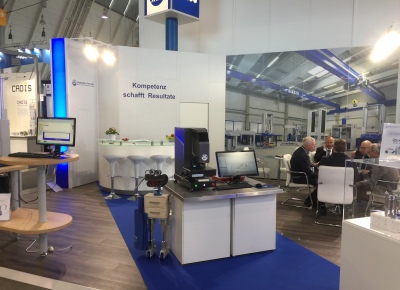 A few days ago, the international trade fair for quality assurance Control ended in Stuttgart. A total of 883 exhibitors from 31 countries presented their products and services from 24 to 27 April. More than 28,000 trade visitors from 98 different nations came to find out about new products and to make new contacts or expand existing ones. These are considerable figures in view of the parallel Hanover Fair.

Hegewald & Peschke Mess- und Prüftechnik was once again represented as an exhibitor at this year's Control. The exhibition stand was very well attended and a large number of interesting discussions were held, including with numerous new customers.

The new Inspekt mini, which was presented at the fair, proved to be a real eye-catcher. This particularly light materials testing machine is used to determine the material characteristics of various test specimens, such as foams, elastomers, plastics, paper, cardboard, textiles, foodstuffs or components.

Furthermore, the first research results of the Thermipower project were presented at the fair.

Intensive software demonstrations of LabMaster were also in great demand. In this way, we received a lot of positive feedback about the range of functions and the user-friendliness of our testing software. 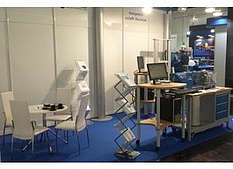 From 16 to 20 April 2018, Hegewald & Peschke MPT GmbH was represented for the second time with a trade fair stand at the biennial WIRE trade fair in Düsseldorf. At the same time, the TUBE trade fair took place in the halls of Messe Düsseldorf, as both fairs are mainly aimed at wire and tube manufacturers as well as plant manufacturers. With more than 71,500 trade visitors from 134 countries, Wire and Tube recorded a significant increase compared to 2016. 2,683 exhibitors from 67 countries presented their products and services in Düsseldorf. Due to the continuously increasing demands on quality assurance and the associated testing technology, It is particularly important for Hegewald & Peschke to advise customers competently in the testing of wires and tubes.

An Inspekt table 10kN and a torsion tester were shown at the stand. The application of the torsion test on wire aroused great interest among the visitors. With the Inspekt T-200H torsion test rig, not only the twisting test according to DIN EN ISO 7800 can be mapped, service life tests and alternating torques can also be applied to the specimen. The channels of the angle of rotation and torque are recorded in real time with the universal test software LabMaster. The results and progressions of the tests provide valuable results for the design and development departments, for example, for their new developments.

Customers with specific tasks for universal testing machines also came to the Hegewald & Peschke stand. For this occasion, the Inspekt table 10kN universal testing machine was equipped with a pneumatic curve specimen holder, which was specially developed for testing thin wire samples. This special type of clamping allows the specimen to be tested without jaw breakage. This is not possible with conventional clamping devices.