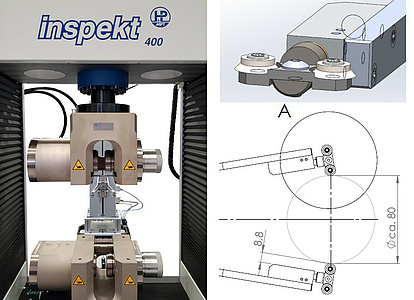 The testing system consists of a universal testing machine Inspekt 400kN, which is equipped with a one-sided hydraulic clamping tool 400kN, which allows the force-axial alignment of the specimen form for tensile tests specially developed by Esta Rohr. The strain measurement is implemented with a special version of the MFX long-stroke strain gauge. The automatic extensometer is controlled via the LabMaster test software, which not only allows template management and test execution, but also parameterization and test documentation. With reference to quality management, all tests with test and specimen-specific data are stored in an SQL database and can be searched for and found at any time, for example with regard to production batches, test results, test person, etc. The test data is stored in an SQL database.

Since the pipe specimens are clamped compressed and concave curvature occurs during the tensile test, a special version of the MFX long-stroke extensometer with double folding blade is used. The round cutting edges are made of hardened HSS working steel with high adhesive and abrasive wear resistance and high toughness and compressive strength. The folding mechanism diverts the energy during breakage and does not transfer it to the incremental displacement measuring system, which is particularly advantageous for brittle materials and to protect the test system.