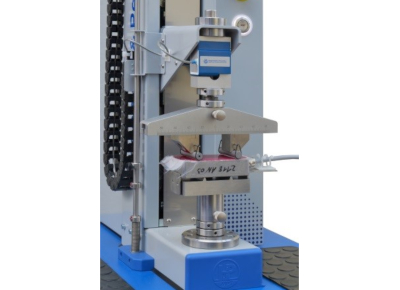 Electronics and electronic connection technology are used in almost every industrial sector today. This area, which is also referred to as "Industrial Connectivity", is Weidmüller's main business field. In addition to its headquarters in Detmold, the company has other locations in Germany and around the world. Since 2016 condition monitoring systems for wind turbines have been developed, manufactured and sold at the Dresden site. After Hegewald & Peschke has already equipped other locations of the Weidmüller Group with its own testing technology several times to the great satisfaction of the customer, the first project has now been successfully implemented for the company's Dresden branch.

The testing machine now used is an Inspekt solo 2.5 kN with a bending device for 4-point bending tests. The handling is designed in such a way that a test takes less than three minutes. In this way, up to 150 specimens can be tested per day.

The test specimens are very precise strain sensors for industrial applications, e.g. for installation in rotor blades in wind turbines.

The material testing software LabMaster is used for the execution and evaluation of the tests.