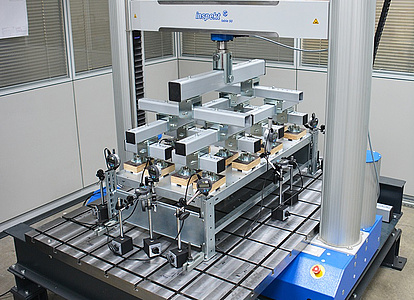 Hegewald & Peschke Meß- und Prüftechnik GmbH has supplied the company SCHULTE Lagertechnik with a universal testing machine type Inspekt 50 kN. With the use of the new machine, the North Rhine-Westphalian specialist for bearing and logistics systems can now comprehensively expand its testing possibilities.

Have you ever wondered where the weight information comes from when buying new shelves? The permissible load of shelves is determined in tests in which the shelves are tested step by step first up to the nominal load and then until failure. A certain number of load application points are required when carrying out the test. Since there is no corresponding DIN standard, the test arrangement and the test conditions have been determined by the German Institute for Quality Assurance and Marking in RAL. For this purpose, SCHULTE Lagertechnik, for example, has now purchased a universal testing machine from Hegewald und Peschke.

SCHULTE Lagertechnik was involved in the planning and implementation of the test system and was able to contribute its own requirements. Thus Hegewald & Peschke adapted its universal testing machine inspekt table 50 kN to the special requirements of the customer on site and equipped it with a wedge grips 50 kN and the material testing software LabMaster. The device for the tests was developed and built by SCHULTE Lagertechnik itself - Hegewald & Peschke supported in the CAD program to ensure that everything worked smoothly.

"From the offer phase to the technical clarification and the implementation, the concept of Hegewald & Peschke was coherent. In addition, the intuitively usable software convinces with its numerous expansion options and easy handling".

Extension of the testing possibilities

The newly acquired universal testing machine is used to test shelving racks and shelves according to RAL-RG 614/1. The quality and testing regulations for storage and operating equipment RAL -RG 614 define the requirements for quality and safety of shelving and cabinet systems.

"In addition, we are now able to carry out material tensile tests for incoming goods inspection and component optimization. The option for bend and transom connection tests according to standard rounds off the field of application of the new testing machine".

SCHULTE Lagertechnik optimizes with the new testing possibilities its designs as well as the material usage.

"Since the commissioning of the new machine we have already been able to achieve first successes in the component and material optimization on various shelf parts. This has not only benefited us for our serial parts, but also for special parts for projects".

Since its foundation in 1921, the family business Gebrüder Schulte GmbH & Co. KG has been manufacturing and developing its products in Sundern, Sauerland, and is one of the leading shelf manufacturers in Germany. Under the brand name SCHULTE Lagertechnik, high-quality shelving systems are produced for professional users in industry and trade. The product portfolio covers the entire world of storage technology - from consulting and planning to the assembly of a system.