Variability in design and application 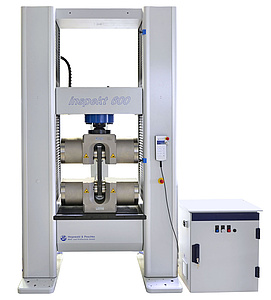 Universal testing machines of the inspekt series: Variance in design and application

Testing machines are used in almost all industries and are applied for material and component testing involving a wide variety of testing methods. Especially for high-strength materials, such as many metals and modern composites, as well as for components that have to withstand extreme loads, such as screws and chains, testing machines are required that achieve the highest precision at maximum test loads. The universal testing machine series inspekt from Hegewald & Peschke was developed exactly for this purpose.

The machines are characterized by a large variance in load range and application areas. For example, while a testing machine with a maximum test load of 100 kN is sufficient for most bending and folding tests according to ISO 7438 or VDA 238, up to 2,500 kN are sometimes required for use as a calibration machine. For metal tensile tests according to DIN EN ISO 6892-1 or bolt tests according to DIN EN ISO 898, test loads of up to 400 kN are usually sufficient. In contrast, large chain links can often require maximum forces of up to 1,200 kN. All these requirements can be covered by the testing machines of our inspekt series.

The flexible design of the testing machines is reflected in the variable test room heights and widths as well as an optional lateral test room - in addition to two vertically arranged test rooms. This arrangement allows different testing tasks to be carried out without having to modify the testing tools. Peripheral devices (e.g. furnaces, temperature chambers) and additional measuring and control channels can also be easily connected as standard. The user-friendly material testing software LabMaster ensures optimum interaction between the individual components of the testing system. The extensive range of specimen grips, test tools and extensometers ensures compatibility with a wide variety of test methods and reliable specimen clamping.