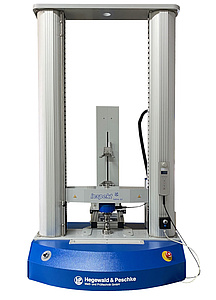 Hammerer Aluminium Industries (HAI), headquartered in Austria, has been a satisfied customer of Hegewald & Peschke since 2007. Several inspection systems have been supplied to HAI since then. In 2015, the company opened the production site in Soest, which was expanded by a new production hall of 8000m² in 2018. In connection with the expansion of the plant and the demanding testing requirements of its customers, HAI ordered another Hegewald & Peschke universal testing machine. Now, the second inspekt table 50kN universal testing machine - equipped with a 50kN wedge grips, an MFX200 long-travel extensometer and LabMaster materials testing software - has been delivered to the Soest plant.

The HAI Group serves the transport & automotive, industrial and construction markets. With the plant in Soest, HAI can support its customers in the industrial and automotive sectors even better. With its products, the Soest site also plays an important role in the use of aluminium as a material for lightweight construction in the automotive industry.

The test system from Hegewald & Peschke is used in quality assurance for tensile tests on flat and round aluminium specimens according to DIN 50125 and DIN EN ISO 6892-1. Elongation at break and tensile strength are to be determined.