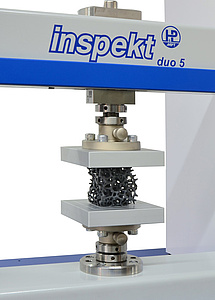 Additively manufactured foam components are finding their way into a wide variety of industries and fields of application. They are flexible, comfortable, lightweight and can be individually shaped.

To research and further develop the properties of the materials as well as the pore structures of the foams, a universal testing machine inspekt duo is used at the Chair of Solid Mechanics at the University of Siegen. The testing machine is equipped with compression plates for performing the material tests. 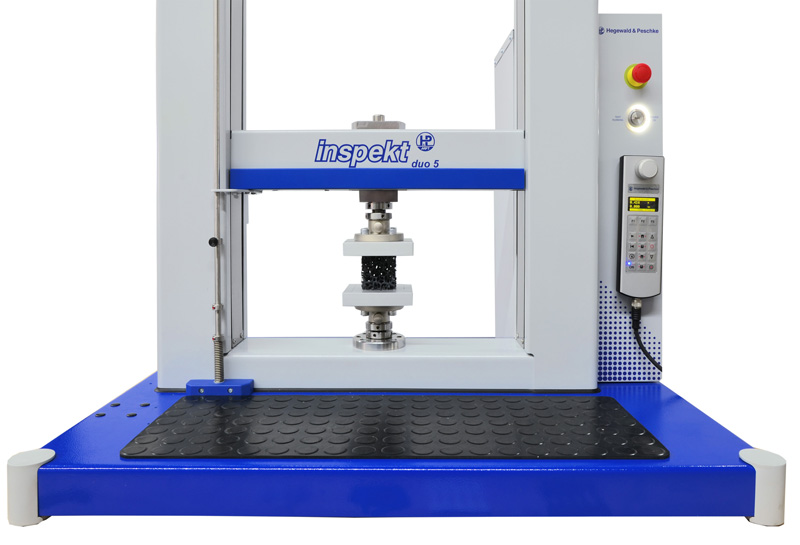 The creep tests are used to determine the creep behaviour of the plastics under a constant load. In the creep test, the load or stress is kept constant for a certain time. In the process, the strain increases because the material flows/creeps. The testing machine measures the strain throughout the traverse path. The high resolution of the crosshead travel measuring system of the inspekt duo testing machine (<0.025 µm) ensures exact strain measurement.

The testing machine is also used to carry out relaxation tests. These assume a constant deformation, whereby the decrease in stress is registered as a function of time during the test. In detail, during the relaxation test, the test specimen is loaded up to a predefined compression. This state is maintained for a defined time in order to subsequently measure the load or stress drop.

The universal material and component testing software LabMaster is used to carry out and evaluate the tests. The testing software contains all the standard functions for carrying out creep tests and relaxation tests easily, conveniently and clearly. In order to keep the database fast and manageable during long-term tests, the data acquisition can be reduced in certain test phases. In most cases, less data is required for evaluation during the holding times of relaxation tests than, for example, during load application or unloading. For metallic cellular structures, the in-house testing software LabMaster also enables compression tests according to DIN 50134.

For research and development, the testing machine is used to test specimens with different pore structures - from homogeneous to very inhomogeneous arrangements. The size of the pores and static elements is also variable. The specimens for material testing are each produced with a 3D plastic printer.