With the torsion testing device TW-500H, torsion tests on wires according to DIN ISO 7800 can be carried out in a particularly efficient, time-saving and convenient way. 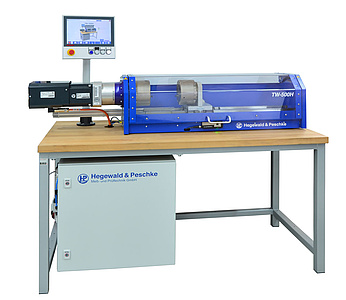 In addition, Hegewald & Peschke offers a series of torsion testing devices that can be used for simple as well as highly complex torsion tests up to 5000Nm.

Specifically for simple torsion tests on wires according to DIN ISO 7800, the torsion testing device TW-500H has now been newly developed. The model is equipped with a PLC control and operation via touch screen. By using templates in which all parameters are already set based on the standard specifications, the test can be started quickly and easily.  Alternatively, the test parameters can be entered individually via the touchscreen. Interactive user guidance leads the user through the criteria predefined in the standard. The test results can be exported as CSV and are thus traceable for documentation and quality management. The torsion testing device convinces both visually and functionally as a compact overall system with a fixed work table and integrated control cabinet. The control system automatically detects the breakage of the wire and stops the test. The torque is determined indirectly via the motor power. In order to provide the operator with the highest possible level of work safety, the torsion testing device is equipped with an electrically interlocked safety door. A secure hold is guaranteed when the safety door is open. The tensile stress in this model is not applied via dead-load weights as usual, but configurably via a pneumatic cylinder.

In addition to the torsion testing device, the clamping devices for wires have also been optimized. A modular system makes it easy to change the clamping jaws for different wire diameters. The clamping of the wires can be carried out quickly and easily. The clamping length can be comfortably adjusted via a scale in the machine bed.

With the torsion testing device TW-500H, torsion tests on wires according to DIN ISO 7800 can be carried out particularly efficiently, time-saving and comfortably, because the complete testing system is optimized for this purpose. For torsion testing and torque loading on other materials or components as well as tests according to different standards, Hegewald & Peschke offers torsion testing devices with the universal material and component testing software LabMaster. This contains extensive possibilities of the test setup and is particularly aligned to the individual needs of the customers. The software offers a flexible, user-friendly concept for both simple and complex testing tasks.