Testing of sandwich elements according to DIN EN 14509 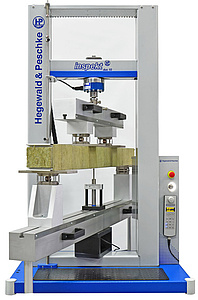 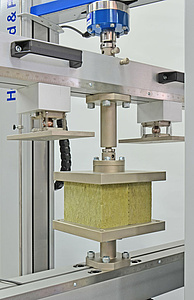 Sandwich elements can be used for a wide range of applications and are particularly suitable for the rapid construction of industrial buildings, for example. They offer thermal insulation, high load-bearing capacity, optimum stiffness and good joint sealing. For material testing on self-supporting sandwich elements with metal cover layers on both sides according to DIN EN 14509, Hegewald & Peschke has delivered a universal testing machine inspekt duo 10 kN to ArcelorMittal Construction in Sweden. The company produces innovative and sustainable construction systems for energy-efficient buildings.

The testing machine is used to perform bending tests as well as compression tests and tensile tests according to DIN EN 14509. The 4-point bending bench has freely mounted supports with load distribution plates that ensure optimum load introduction into the sandwich element to be tested. For precise determination of the deflection, an incremental measuring probe with 0.5µm measuring accuracy is attached to the lower bending beam.

Testing the transverse tensile strength vertically to the element

Tensile tests according to DIN EN 14509 procedure A.1 are realized in this test setup via a lifting device to be installed in the bending bench. This allows many different test applications to be implemented without complicated modification or removal of the heavy bending bench. After the tensile test, the material and component testing software LabMaster automatically calculates characteristic values such as the transverse tensile strength of the element fCt or the tensile modulus of elasticity of the core ECt.

Testing the compressive strength and modulus of the core material

Various testing machines from Hegewald & Peschke are also used at other sites of the Arcelor Mittal Group. Among other things, an Instron 10 kN universal testing machine was modernized at the company's Saxon plant in 2021.