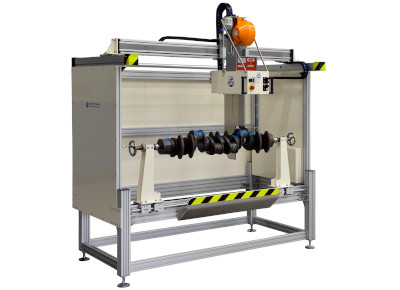 Test stand for the hardness testing on crankshafts

Crankshafts have to withstand complex mechanical stresses during operation. This is why their hardness, for example, is tested during production. Hegewald & Peschke has, in addition to other hardness testing systems, a measuring station for crankshaft testing in its extensive hardness testing program.

The test bench for crankshaft testing is used for standard-compliant hardness measurement using the Rockwell C method on crankshafts and similar workpieces. All cylindrical surfaces (pins) arranged parallel to the axis of rotation can be measured. The measurement is made perpendicular to the axis of rotation in any radial angular position of the workpiece. The system can be used to test crankshafts up to a length of 1500 mm and a diameter of 20 to 205 mm. The workpiece is positioned and clamped between the two points. To reach a measuring position, the workpiece can be rotated freely around its axis and the probe can be aligned to the workpiece in X, Y and Z directions.

Once a test position has been reached, the operator triggers the force-supported clamping and centring of the stud to be tested. The hardness measurement (loading and unloading with test force) is then carried out automatically via the integrated pneumatic system. The measured value is shown on the display and can be output via an RS232 interface after each measurement.