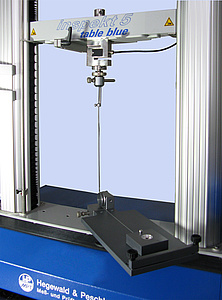 Nossen/Saarbrücken – A universal testing machine of the type Inspekt table blue 5kN by Hegewald & Peschke MPT GmbH performs valuable research in Saarbrücken. The INM - Leibnitz Institute for New Materials uses the construction of the Saxon test technology specialist for the systematic development of new surgical suture materials. The Inspekt table blue 5 kN thereby undertakes special pulling-through tests and thus accomplishes basic tasks in the area of material testing. Aim of the research project: A new thread shall be developed which makes it possible to suture wounds without knots. Through this the time for sewing and the scarring would be reduced considerably.

The INM – Leibnitz Institute for New Materials gGmbH investigates and develops as an international center for material research substances which cope with the demands of the presence and future.

In the context of pulling-through tests the researchers of the INM pull the new surgical threads through artificial skin or pig skin. To this the threads are loaded with defined weight on one side while the other side is fastened to the force sensor of the testing machine. In the next step the thread is pulled through the test fabric and the appearing strengths are measured at different speeds. The universal testing machine of the type Inspekt table blue 5 kN records among others relief curves with which the qualities of the suture material can be characterized exactly.

“With the machine we want to determine the strengths which appear during sewing” , Dr. Elmar Kroner, acting leader of the program segment Functional Surfaces at INM, explains. “Thereby the increased pulling-through strength which appears at tensile load contrary to the sewing direction is primarily relevant for us. We here talk about the so-called sticking friction between thread and fabric. That way we could show among others that the sticking friction depends on the pulling-through speed, however not the sliding friction. Repetitions of the tests gave us information about the resistance of the threads to damages when pulling-through.”