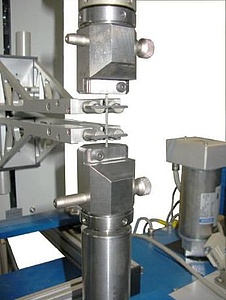 Initially used primarily in the field of plastics, additive manufacturing is increasingly gaining importance in the metal sector. This manufacturing process can be used cost-efficiently, especially for small quantities, because unlike cast parts, for example, there are no tooling costs. Complex processes such as machining, e.g. milling, are largely eliminated. This is of great interest when building prototypes, also known as "rapid prototyping". Here, the creation of a prototype often takes only a few hours. This can be a decisive competitive advantage with increasingly tight project lead times. However, it is all the more important to ensure the quality of the manufactured parts through appropriate material testing.

The company 3D MicroPrint GmbH manufactures small, high-quality metal components and carries out tests to examine the mechanical characteristics, such as tensile strength, yield strength and elongation at break. 3D MicroPrint GmbH has specialised in the production of micro components and uses the so-called micro laser sintering process. In principle, this manufacturing process is interesting for all industries, but especially for medical technology, aerospace, the semiconductor industry, sensor technology, filtration and flow technology. In contrast to traditional casting, for example, this is a relatively new manufacturing technology that has been used in the industrial environment for 10 years. The aim is to establish this technology alongside existing casting technologies in the series and mass market.

The model, which is designed in 3D on the computer, is produced using the powder bedding process. In this process, the powder material of a workpiece is applied layer by layer and solidified. In micro laser sintering, the material is melted by laser in a structured manner and thus bonded together layer by layer. This process does not require any additional tools and is carried out by means of digital data exchange.

The main feature of micro laser sintering is, among other things, to create wall thicknesses of less than 100 µm with a material density of more than 99 % while maintaining dimensional accuracy and full material properties. Through an in-house powder specification and the corresponding micro laser sintering technology, these market requirements can be met and in some cases even exceeded. Due to these high resolutions of the component geometries and -(Metal Injection Moulding) process, the same or even higher quality standards can be achieved.

Particularly with regard to surface roughness, Rz values of less than 10- 25 µm are achieved with simultaneous high densities of over 99.5 %. Component quantities of several thousand pieces are thus available in a few days or weeks with full flexibility of component design at the same time.

In order to ensure these properties for industrial sectors such as medical technology, on the one hand customer requirements are checked according to in-house certification to ISO 9001:2015 and these are already processed and documented according to the requirements of ISO 13489 (safety-specific standard).

For the tensile test on metallic materials according to DIN EN ISO 6892, the specimen forms according to DIN 50125 prove to be a good basis, but they require close examination. Especially the radii and transitions between specimen head and specimen waist often cannot be used in the usual way. Although they can be manufactured without any problems, short and sharp transitions, such as in thread or shoulder specimens, lead to local excess stress and corresponding failure at these points - the tensile tests with this fracture position would all be invalid. Depending on the manufacturing process, the surface must be reworked and cannot be tested "as-built". Further limitations in the choice of a specimen shape occur especially with high-precision and expensive manufacturing processes, as the specimens should be as short as possible. Classic specimen grips, such as wedge grips or screw grips, can only be reduced in size with great effort. Much simpler are then form-fitting fixtures, but without threads. Flat or round tensile specimens with a shoulder as a counter bearing are easy to manufacture and simple to test.

When miniaturising the specimens and correspondingly the test setup, various influencing factors must be taken into account. One challenge here is the precision and axiality of the specimen clamping and force application. This means, for example, that the form-fitting fixture must be manufactured within a narrow tolerance window and should offer the possibility of self-alignment.

Furthermore, the force application axis, which concerns the load cell as well as the upper and lower clamping, should be precisely axially aligned to each other in a unidirectional manner. Deviations in the µm range can already lead to the introduction of transverse forces and falsify the result. It is also necessary that the mechanical engineering of the testing machine is optimised in such a way that when the moving crosshead is moved, this axiality is not impaired over the entire test stroke.

An additional challenge of the downscaling of the testing task is the determination of the strain parameters.

In principle, elongation is defined as the increase in the initial gauge length at any given point in time, expressed as a percentage.

This elongation can be determined conventionally via the travel measuring system of the testing machine or via a special elongation measuring device, also called extensometer.

The determination of the elongation based on the travel channel of the testing machine is always subject to various influencing variables. Especially the stiffness of the test setup, to which besides load frame also the load cell, the adaptation of the components as well as the specimen clamping contribute, is of importance and can lead to a considerable measuring error.

Therefore, the determination of the specimen's deformation by means of an extensometer is recommended. ISO6892-1 explicitly speaks of extensometer strain. This applies especially when results are to be determined for which small strains are required, such as when determining the modulus of elasticity.

In tensile tests on additively manufactured components, sample lengths of less than 10 mm are not uncommon due to material and manufacturing costs. This makes the use of tactile measuring systems almost impossible or extremely costly.

Optical measuring methods can be used in this field of application. Laser extensometers and video extensometers with special telecentric or semitelecentric lenses allow the determination of specimen elongation according to class 1 of ISO 9513 for smallest initial gauge lengths.

In addition to "standard universal testing machines", the company Hegewald & Peschke has developed micro testing machines for static tensile tests on miniature specimens as well as for cyclic testing tasks. The miniature testing machine inspekt micro S500, for example, is equipped with a displacement measuring system that has a resolution of 5nm and allows tensile, compression, bending and peel tests on laser-sintered materials and components up to 500N.

Due to these high requirements, the quality assurance department of 3D Micro Print GmbH has been working with Hegewald & Peschke Meß- und Prüftechnik GmbH for some time. Due to its many years of experience in the field of micro testing and measuring technology, Hegewald & Peschke is an experienced and reliable partner for the field of testing technology for additive manufacturing processes.